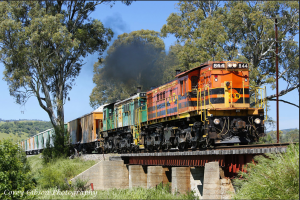 Locomotive 844 was built by AE Goodwin and Co, and their Granville, NSW workshops, and entered service with the South Australian Railways on the 25th October 1962, servicing on both broad and standard gauge’s, before being placed into storage at Dry Creek, following the cessation of stone train operations between Penrice and Osborne.

Locomotive 844 will join sister unit 845, which is currently under restoration at SteamRanger’s Mount Barker Depot, in providing a strategic backup to our fleet of operational steam locomotives.

The locomotive is expected to be moved by road from Dry Creek to Mt Barker in the coming months, where it will receive a cosmetic overhaul to its original livery, and undergo the appropriate accreditation for operation on our Cockle Train service.

We thank OneRail Australia for their generous support.

Summer is here, and at SteamRanger that means one thing – Cockle Trains!
December 25, 2022