On the 22nd July Don Snow called into the Victor Harbor Station for a chat and a “Key Hand Over” ceremony.

It was great to see Don with his wife Joan and Don was only too happy to pass on his trusty keys to Danny. It was Danny’s first day solo and it gave Don a chance to reminisce about the good old days and how well his keys worked.

We wished Don all the best for the future and asked him to drop in from time to time. 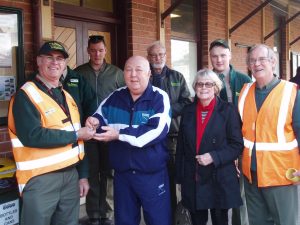 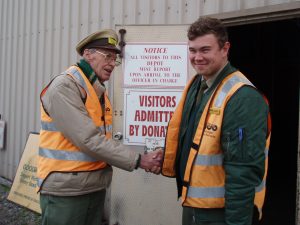 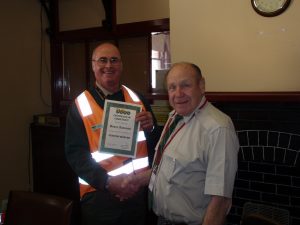 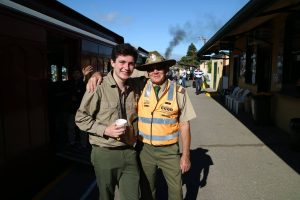 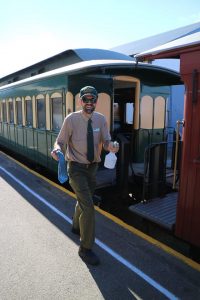 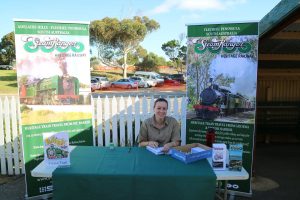 The South Australian Wooden Boat Festival was held over the weekend of the 22nd – 23rd April 2017, and saw trains operating to an intensive six-train schedule, and requiring a full compliment of crews, for two train consists, and station staff for both Goolwa and Victor Harbor.

Easter Sunday saw a visit to the Cockle Train by the Easter Bunny – the Bunny suit was provided by Helen Bradbury, and ‘crewed’ by Sam Cole and Billy Morgan. The bunny was snapped by Alan Potter posing with the crew at Goolwa, and handing out some tasty chocolate eggs, which were kindly sponsored by Foodland Goolwa, Woolworths Victor Harbor, Coles Victor Harbor, Bendigo Bank (Goolwa Branch), Haighs Chocolates and a number of south-coast volunteers.

The promotion was well received by all. 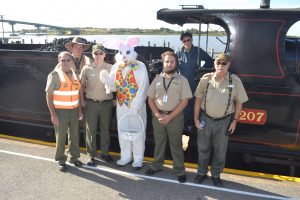 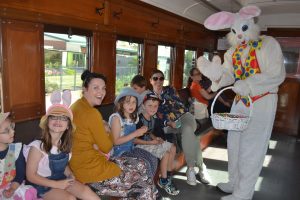 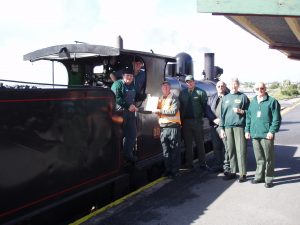 Dale Patyi is pictured receiving his “Certificate Of Appreciation” for his 4 years of Loco Service to SteamRanger.

Dale had arranged time off from work to help on the 11th October CockleTrain service and is pictured with fellow volunteers at the Goolwa Station prior to the 3551 service.

It speaks volumes when we know that dedicated volunteers need to apply for leave from work and use up their holiday leave to help keep us running. In particular we thank Dale and Peter Brown on this particular day, however we acknowledge all the other workers who also go the extra mile to take leave to keep us on track. 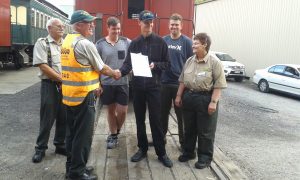 Rylee started with SteamRanger as a Work Experience student and enjoyed the work so much that he continued as a Trainee Junior Passenger Attendant.

He is receiving his competency award from the HR Manager Andrew McDonough on the 31st December at the Goolwa Depot upon the completion of a days work. His Trainee David Linke was present along with work mates Billy Morgan and Hamish Camens who called in to see Rylee receive his award. Julie Hille was also present to ensure things went smoothly.

Well done Rylee and thankyou for your efforts to obtain your certificate. 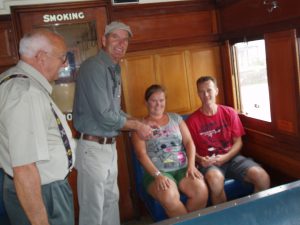 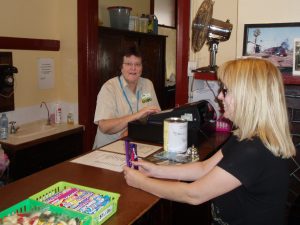 New Passenger Attendant Alan Foster (Left) under the watchful eye of Trainer Dave Linke on the CockleTrain Sunday the 4th Dec. Alan has worker with us for a couple of days is getting the hang of things. The passengers seem to have something to smile about.

Sue Cook (Right) who has been with us for some time is multi skilling and learning the ropes of the Shop at Victor Harbor. She had a good day under the supervision of Rosemary Kelly on Sunday the 4th of December. She is busy selling chocolates to this lovely passenger. I am told the till balance at the end of the day was also spot on. No doubt thanks to Sue’s skill and Rosemary’s teaching. 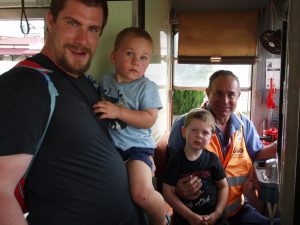 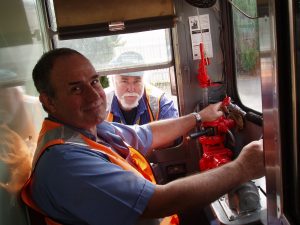 There to wish Dad and Papa John all the best on his assessment day was son Phillip and two very robust Grandies. 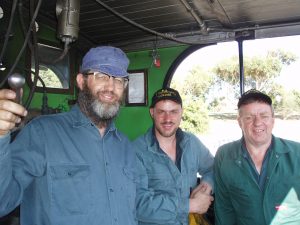 Ben Greeneklee was on a “Training Day” with Brenton Job as his trainer, clocking up his training hours on the Rx. In the cab of Rx207 on Saturday 21st January, Andrew McDonough caught Ben Greeneklee, Matthew Job and Brenton Job during the layover in Goolwa.